A few weeks ago, I went to an amazing illustration conference at Pickwick State Park in Tennessee. It was the culmination of the MidSouth SCBWI Creating Your Best Dummy Workshop, a six-month program where 16 illustrators revised a picture book manuscript and created a dummy and illustrations.

In the months before the conference, we worked with Scholastic Editor Orli Zuravicky, who critiqued our manuscripts twice, and Penguin US Senior Art Director Giuseppe Castellano, who provided feedback on our draft illustrations. We developed a full dummy for the story, and at the conference weekend, we met with Giuseppe for critiques, presentations, Q&As, and discussions about children's illustration.

Then we launched into drawing exercises. Giuseepe asked us to draw six boxes on a sheet of paper and draw his prompts in under a minute each. This was my first sheet (prompts were bird, mammal, person, plant, texture, anything): 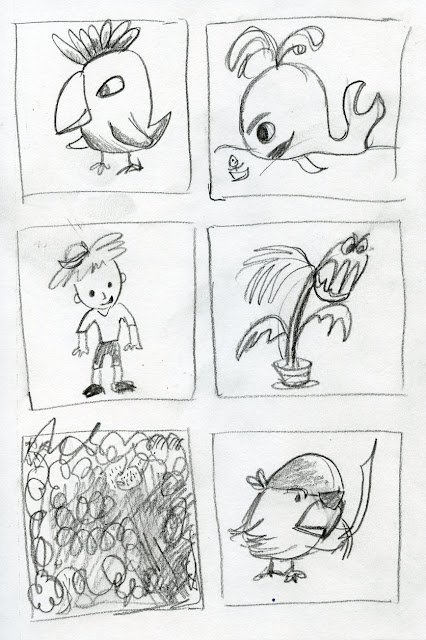 Giuseppe pointed out that almost all of us made equal sized boxes and drew without considering design, environment, or other creative touches. The next round, everyone got more creative with the prompts (insect, robot, city, little, car, anything). Here was my second set of sketches: 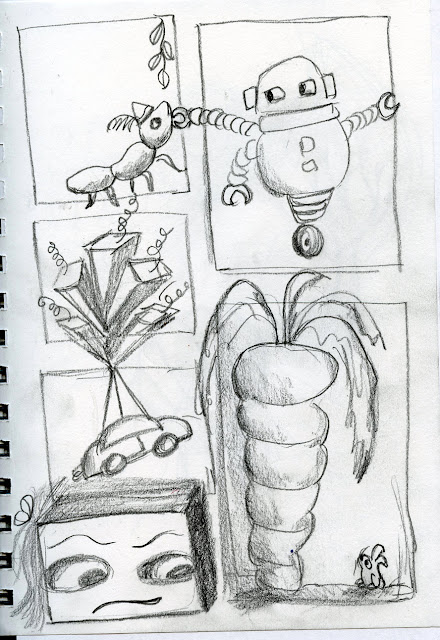 We also did a series of "draw offs" where people voted between two illustrators' interpretation of the same prompt. It was uncomfortable to both vote and be voted on, but a lesson learned--you will be judged in this industry.

In the afternoon, we had free time to revise our illustrations, so I played with different looks for kraken: 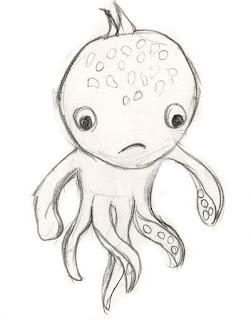 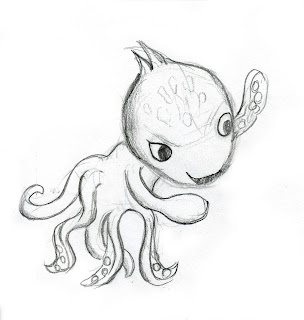 I showed him my kraken character sketches and he pulled out tracing paper and gave me some great ideas by drawing his own kraken. Even though I was almost the last critique in a long non-stop day for him, I could tell he got really into designing a kraken. As a result of those comments, I came up with more drawings: 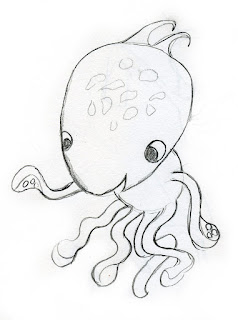 When I came home, I ended up with this (going back to the original face but adding some sea monster-y-ness.  It is still a work in progress):


Unfortunately, my friend Teresa and I had to leave early so I could catch a plane so I missed the final comments from Giuseppe. If they were anything like what he told us throughout the weekend, I am sure he was extremely inspirational and supportive.


So I'm newly inspired by Giuseppe Castellano and all the illustrators of the workshop.