I've been reading some amazing graphic novels recently, and just by chance, they tell previously untold stories from diverse perspectives & historical eras. I didn't set out to read diverse graphic novels - they were books I had heard of because I liked the author, or they were recommended, or I happened to win it through a giveaway. So here are my recent reads, which I heartily recommend: 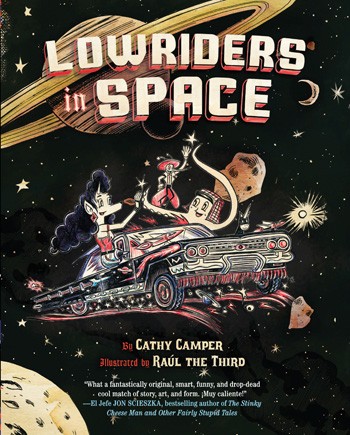 Lowriders in Space is a fun and fast read about three car-obsessed critters, Lupe the Impala (a mechanic), El Chavo Flapjack Octopus (a car washer), and Elirio Malaria (a mosquito detailer) who work for an oppressive garage but dream of opening their own.


With a dash of Mexican slang (slightly different from the Venezuelan slang I grew up with) and influenced by the Mexican American car culture of young people souping up old cars to make them "Bajito y suavecito" (low and smooth, or low-riders), this book tells the zany story of friends scavenging an old airplane/rockets parts factory to build their dream car. When they discover the car can fly into space, they know they have the secret ingredients to really soup up their car for an upcoming contest. (I won this book through a LibraryThing giveaway)

Two companion books that tell the story of the Boxer Rebellion in China (1899-1900), an anti-imperialism and anti-Christian missionary movement, from opposite sides of the movement.

In Boxer, a foreign priest and his soldiers smash up Little Bao's peasant village. Little Bao learns the ancient magic of calling up the ancestor gods and leads a rebellion that eventually reaches Beijing. The story is violent, bloody, and does not have a happy ending.

In Saints, Vibiana is an unwanted and unappreciated girl in a neighboring village who converts to Christianity and finds some purpose in helping the foreign priest and his flock. Joan of Arc becomes her guiding spirit as she joins the fight against the Boxers. The story is violent, bloody, and does not have a happy ending.

Because of the violence, this is probably more suited to older audiences, though my ten year old read it and appreciated it. I learned a lot about this period of Chinese history and enjoyed the parallel story arcs that intersected with each other and how well Gene Yang told both sides of the story.

A superb, moving & powerful story of an African-American infantry regiment in World War I that faced racism at home and abroad while fighting for the Allies. Stymied at every turn while training in the U.S. (not given adequate equipment, beaten up and abused by racists, refused any type of parade or honor), in transit (sent over to Europe in a broken down ship), and upon arrival (put to digging and grunt work), the 369th Infantry Regiment nevertheless served in combat longer than any other American unit, lost no men or ground, and fought through some of the most bloody battles of WWI.

The Germans called them The Harlem Hellfighters. When they finally came home, they were treated to the parade they were denied upon leaving, but even still, they faced discrimination and saw some of the U.S.'s worse years of racial violence.

Graphic artist Caanan White did a masterful job of conveying the violence and mayhem of war through his dramatic and graphic black and white art.  Sometimes the panels were difficult to read because so much movement was going on in each panel. Like a puzzle, these complex images invited the reader to decipher what was happening, sometimes to our dismay and horror.


P.S. The #WeNeedDiverseBooks Indiegogo campaign to raise money to increase diversity in kidlit has three more days to go. Please check it out and consider supporting this important cause.