Review: Some Works of Shaun Tan

Australian author-illustrator Shaun Tan recently won the Astrid Lindgren prize, the world's largest prize for children's literature. According to the prize committee, "Shaun Tan is a masterly visual storyteller, pointing the way ahead to new possibilities for picture books. His pictorial worlds constitute a separate universe where nothing is self-evident and anything is possible." Earlier this year, he won an Oscar for Best Short Film (Animated) for the animated adaptation of his picture book, The Lost Thing. Here's a review of a few of his works:
Picture books 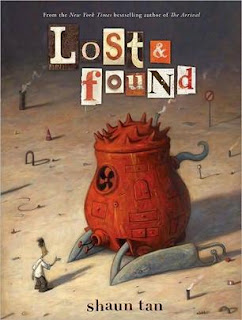 Lost and Found, by Shaun Tan (Arthur A. Levine, 2011), compiles three of Shaun Tan's picture books in one volume: The Red Tree (2001), The Lost Thing (2000), and The Rabbits (1998). Both the stories and illustrations are layered, intricate, and moody, lending themselves to long contemplation and admiration. Though aimed at all ages, they are more suitable to older children and adults. My almost 7 year old, for example, thought the stories were too sad and did not enjoy them. The three stories are: 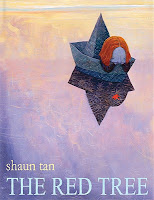 The Red Tree. This simple story starts off on a somber note: "sometimes the day begins with nothing to look forward to . . . and things go from bad to worse . . .darkness overcomes you . . . nobody understands . . ."and stays unrelentently morose. A little girl wakes up in a room slowly filling with black leaves and wanders through surreal and unhappy citi- and dream-scapes, disconnected from herself and others. Only at the end does she come back to her room to find a ray of bright hope. 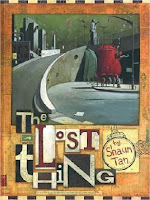 The Lost Thing. A boy finds a giant, red lost thing on a beach and takes it home with him. After his parents initially failed to notice it ("too busy discussing current events, I guess") but then banished it, the boy sets out to find a place for it. He starts with the Federal Department of Odds & Ends, but a strange janitor being tells him not to leave it there, for "This is a place for forgetting, leaving behind, smoothing over." He hands him a card with a mysterious arrow sign, which eventually leads the boy to a hidden alley that opens to a strange, fantastic world of other lost things. 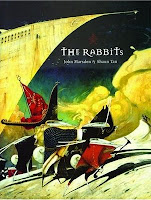 The Rabbits, by John Mardsen, illustrated by Shaun Tan, tells the tale of western colonialism's effects on indigenous populations, specifically the Australian conquest of the aborigines. Here, the Rabbits come, first raising only curiosity and some warnings from the old folk, but soon taking over the land ("They ate our grass. They chopped down our trees and scared away our friends. . . rabbits, rabbits, rabbits. Millions and millions of rabbits. Everywhere we look there are rabbits."). This story, like the reality for aborigenes, has no happy ending, only the question, "Who will save us from the rabbits?"
Graphic Novel 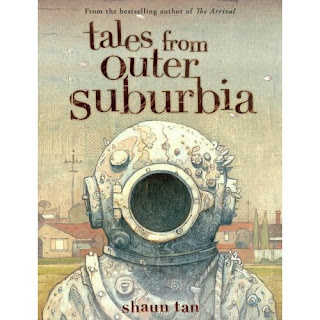 Tales from Outer Suburbia, by Shaun Tan (Arthur A. Levine, 2008). In this compilation of short stories and vignettes, Shaun Tan introduces us to the surreal worlds found in outer suburbia. For example: a water buffalo living in the vacant lot at the end of the street: a tiny leaf-like foreign exchange student who enjoys living in the pantry; broken bits and scraps of poetry that combine into a beautiful, larger poem; a dugong beached 4 km from the nearest beach in a young couple's backyard; residents of a drab, sad country who find impossible rooms within their homes that are portals to luscious, magical worlds; and kids who paint and decorate their government-issued intercontinental ballistic missiles. I loved every one of the stories and the illustrations whose details and flights of fancy are absorbing and impressive.