Author Jon Scieszka and illustrator Lane Smith have collaborated on many picture books, each of them more wonderfully wacky and demented than the next. Along the way, they've picked up a Caldecott. Here are my kids' and my favorites: 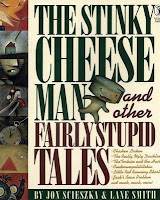 The Stinky Cheeseman and other Fairly Stupid Tales (Viking, 1992) (Caldecott Honor book) These fractured fairy tales are sarcastic, funny, and filled with dark humor. The title story, for example, riffs off the classic tale of the gingerbread baby. But here the main character is a stinky cheese man who repels every creature he encounters, so no one chases him. His stink is so bad that he causes the fox carrying him across the river to gag and throw him to his doom. Other fairy tales receive similar treatment: The Really Ugly Duckling grows up to be a really ugly duck. Little Red Running Shorts is so fast she beats the wolf to Grandma's house and ends the story 2 pages early. And so on.

The best part, however, is how this book breaks the fourth wall, playing with and deconstructing picture book conventions. For example, throughout the book Chicken tries to tell her story, Chicken Licken, but is repeatedly thwarted. She's interrupted by the Title page, frustrated by the lazy illustrator and author who leave a blank page, and meets her demise when she stumbles into Jack and the Beanstalk's giant's story.

Squids Will be Squids: Fresh Morals, Beastly Fables (Scholastic 2000). This compilation of twisted fables offers short, absurd stories followed by dead-pan funny morals. For example, Frog buys skateboard shoes and crashes spectacularly. The moral? "Everyone knows frogs can't skateboard, but it's kind of sad that they believe everything they see on TV." Skunk, Musk Ox, and Cabbage argue over who's responsible for the terrible smell. The moral? "He who smelt it, dealt it." Straw and Matches are playing together, but Matches is obnoxious, rude, selfish, and untrustworthy. Moral? "Don't play with matches." And so on.

Lane Smith's illustrations in this book and the Stinky Cheese Man are textured collages with a distinctive graphic style. His characters are the opposite of cute and cuddly, instead verging on stylized ugly - in other words, perfectly suited to the stories. 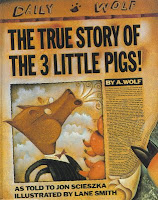 The True Story of the 3 Little Pigs by A. Wolf (Penguin Books 1989) Wolf tells his side of the story. He spins a lovely tale from jail, telling us how he's been misunderstood and unjustly framed for the death of 2 little pigs and the destruction of their houses. He was only trying to borrow some sugar from his neighbors, but his terrible cough and sneezes accidentally knocked down the houses and killed the pigs. He was caught by the cops at the third pig's brick house only because that swine rudely insulted his granny causing him to lose his cool and make a big ruckus. This story is illustrated in warm earth tones and with Smith's signature style.