Introducing My Dad's Memoir: The House Arrest of Zhang Xueliang

I'm please to announce that my father Bernard Liu's memoir is published!

In The House Arrest of Zhang Xueliang: A Memoir of Growing Up with China's Most Famous Political Prisoner, my dad recounts his experience living with one of the most consequential figures in modern Chinese history, Zhang Xueliang, when he was under house arrest under his father's (my grandfather's) supervision, from 1936 to 1962. His family (including his siblings Bohan, Phillip, Theresa, Frank, and Alex) had a unique perspective on Zhang Xueliang, and the memoir also includes recollections of Phillip, Theresa, and Frank.

Here's the Story (from the jacket copy):

When Chinese General Zhang Xueliang kidnapped Generalissimo Chiang Kai-shek in the Xi’an Incident of 1931 and forced a truce between the Communists and the Nationalists to join forces to fight the Japanese, he changed the course of Chinese history. For his actions, Zhang Xueliang was placed under house arrest for fifty years, where he remained secluded from public view. Chief Special Agent Liu Yiguang of the Guomindang Intelligence Agency was charged with the day-to-day supervision of Zhang Xueliang for the first twenty-five years of that house arrest.

In this memoir, Bernard Liu shares his story of growing up as the third of six children of Liu Yiguang. Between 1936 and 1962, Zhang Xueliang lived in the Liu family compound—ten locations in ten years in mainland China and two locations in fifteen years in Taiwan. The author ate meals with Zhang Xueliang, heard his stories and jokes, played poker and card games with him, and witnessed twenty-five years of his life that were largely unknown to the public.

What's New in the English-language edition:

My dad published a version of his memoir in Chinese (House Arrest Days of Zhang Xueliang, People's Publishing House 2018). He reserved the right to publish it in English. The English-language version includes more anecdotes, photos, and recollections from some of my father's siblings. He included photos from his family albums, such as this photo of Zhang Xueliang playing cards with his mistress Zhao Yidi, and my aunt, Theresa Walker. 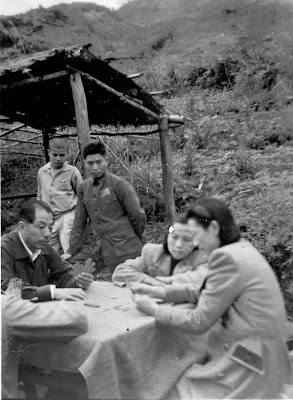 About the Author:
My dad, Bernard Liu, is a retired civil engineer who grew up in China and Taiwan. The memoir describes the years between ages five and 30. He emigrated to the United States in 1963, lived there for ten years, and spent the bulk of his career (23 years) designing large hydroelectric projects in Caracas, Venezuela.
ORDER IT NOW!
Order the Print Book: Amazon | Barnes & Noble | your local bookseller
Free Int'l Delivery to Most Countries: Book Depository
Order the E-Book: Amazon | Barnes & Noble | Kobo
links also at the book's website
If you liked this post, you may also enjoy: