I have always been fascinated by my family history. Both my grandfathers were high level military officials for the Kuomingtang (KMT, Chinese government pre-1948) during WWII and the Chinese civil war with the Communists. Here are some photos and stories of my mother's father. (In a month or so, I will post about my father's father, who also had an interesting life).


My mom's dad, Lieutenant General Fan Hanjie (范漢傑), was one of Chiang Kai-Shek's favorite generals, in charge of Manchuria & Jinzhou in the civil war with the Communists. Chiang Kai-Shek ((蔣中正 & 范漢傑) was the head of the Republic of China from 1928 to 1945, who led the Nationalist government that fought against the Communists in the civil war, and who was the wartime leader of China during World War II.

Here's a picture of my grandfather standing next to Chiang Kai-Shek, taken shortly after WWII in 1945, when Chiang Kai-Shek called a special high level conference with his senior civilian and military officials to discuss a post-war roadmap to rebuild and recover the nation:

U.S. Medal of Freedom
In April 1946, my grandfather was awarded the U.S. Medal of Freedom, Silver Palm, the highest award given to civilians and non-citizens whose actions aided in the war effort. The citation, given by Major General Ray T. Maddocks, Chief of Staff, Headquarters United States Forces China Theater, read:


"FANG HAN CHI . . . is awarded the Medal of Freedom, Silver Palm, for exceptionally meritorious conduct in the performance of outstanding service during the period from 10 April 1945 to 2 September 1945. Major General FANG HAN CHI arranged for special training for Office of Strategic Services personal [sic] and materially aided in dispatching Office of Strategic Services field teams into enemy territory and arranging meetings with puppet and guerrilla leaders there. His willingness and desire to cooperate at all times was one of the major factors of the success of these teams operating in North China. Major General FANG did much to foster and maintain a most friendly relationship between the Chinese and American forces in North China. His achievements reflect the greatest credit upon himself and upon the Armed Forces of the United Nations.


My Grandfather's Encounter with Mao ZeDong's Suitcase of Books

After World War II ended, the Nationalists and Communists resumed their civil war. In 1946, my grandfather led an army into one of the Communists' strongholds in Yen-An, in Shan-xi providence. One of the camps that were abandoned by the Communists just a few minutes before my grandfather arrived had been occupied by Mao Zedong.

My grandfather's men found a large suitcase belonging to Mao that had been left behind, containing 24 volumes of "The Book of Historical Records," published by Su Ma-Jien almost 1,500 years ago around 560 A.D. Everyone was awed by Mao's behavior - that in a critical battlefield, he would bring such heavy books with him to the front line.

My Grandfather in Prison; His Friendship with Puyi, the Last Emperor of China; House Arrest

In 1948, the Communists prevailed over the Nationalists after a critical battle in Jinzhou. My grandfather led the Nationalist army in Jinzhou at the time, and the seige was described in Wild Swans: Three Daughters of China, by Jung Chang:


While my grandmother and her kids (my mom & her brothers) were able to flee to Taiwan, my grandfather was captured by the communist Manchurian Field Army at Jinzhou (1948) and he never saw my grandmother or his children (except one son) again. He was held a political prisoner in Jinzhou for 12 years until he was pardoned and released in 1960.

Here's a screenshot from a PRC government documentary film, "The Battle of Manchuria" of his capture:

After his release, he was sent to a Community Farm in the outskirts of Beijing to be "re-educated." There he met and befriended Puyi, the last emperor of the Qing Dynasty, who was also being "re-educated." At the camp, they tended the garden, watered plants, tilled land, trimmed bushes, and washed their clothes together. He was imprisoned from 1948 to 1960. In 1960, he was released. When Puyi remarried in the 1960s, my grandfather was one of the many invited guests.

After the community farm, my grandfather was placed under loose house arrest until his death in 1976. He and Puyi were assigned to work in the People's Coalition Congress, chaired by Zhou Enlai (first premier of the People's Republic of China) as committee members to provide advice to the government on domestic and international policies. (Zhou Enlai and my grandfather were contemporaries at the Wampu Military Academy in the 1910s - my grandfather was a cadet and Zhou was a young political science instructor). During the Cultural Revolution in the late 1960s, Zhou Enlai shielded my grandfather and other ex-POWs from the Red Guards and the Gang of Four. He was a Special Commissioner on the National Committee, People's Political Consultative Conference (1962-1964) and Member of the National Committee, 1964-1976.


My Grandfather's Personal Life; My Grandmother; My Mother

My grandfather lived in an era in China when it was not unusual to have more than one wife. My grandfather's first two wives died without having any children. He and his third wife adopted a son and had six more boys. My grandmother, Ling Jian-Fong (林劍峰), was his fourth wife. They had three sons and one daughter, my mother.

Because my mom was his only daughter, my grandfather doted on her the few times he was at home. My grandmother came from a very respected family in Fujian, China. Her ancestor, my 7x-great-grandfather was the famous Lin Zexu, of the Qing Dynasty, who precipitated the First Opium War with Britain (1839-42) by dumping 2.6 million pounds of opium into the sea.


In 1948, my grandmother was with my grandfather when he was captured in Jinzhou, but she managed to escape. She fled by foot and was by herself for three days, drinking water from streams to stay alive and seeing awful battlefield sights (corpses all over). She made it to Qinhuangdao, an island controlled by the KMT. She took her children back to her family home in Fujien and then to Taiwan in 1949. Sadly, she and my grandfather never saw each other after he was captured. She left behind a 70+ room housing compound that she owned in Beijing that was confiscated by the Communists and is currently used as a YMCA-like facility. My mom was 11 when they moved to Taiwan. 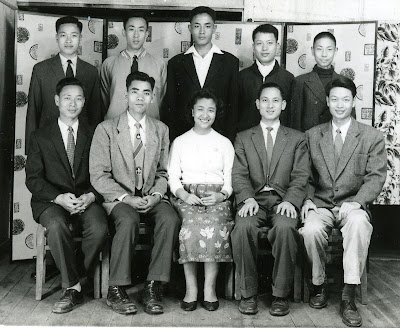 
The next post about my father's dad will continue the story of my mom & dad meeting in the United States, ending up together in graduate school at Utah State University, and eventually settling in Chicago and later Caracas, Venezuela.

And here's a picture of my grandmother as I remember her. I met her on my three visits to Taiwan, when I was six, thirteen, and sixteen. She died in 1996 at the age of 89.


Most of the World War II history in this post was researched by my uncle, Dah Fwu Fan (范大福), pictured above, 4th from the right.