T Campbell, a “comics scriptwriter, just-plain-word writer, cruciverbalist, teacher and all-around creative dynamo,” graciously met with me to talk about his work. His web comics, crossword puzzles, and other writings can be found at T Campbell’s Things.


Q. Tell me about your web comics. What are your currently active series, and what is the one-line elevator pitch for each?

I have four currently-ongoing series, which are updated three times a week:
Penny and Aggie: The prom queen, the class weirdo and the bond between them that neither one can explain.
Fans: Science-fiction fans facing science-fiction situations.
Guilded Age: The saga of the working-class adventurer.
Widgetitis: Tech is forever changing our lives. Hilariously.

Q. How did you end up writing web comics?

I knew I wanted to be a writer since childhood, but I was slower to figure out what form the writing would take. I always loved comics as a child and through high school. At one point, I discovered that one of my favorite science fiction novelists, Peter David, was also a comic strip writer. That put the idea in my head that comics could be a part of the overall picture.

Initially, I had the idea that I had to be successful in a specific form of comics. My first traditionally published comic was Fans in 1999. I found the right artist, Jason Waltrip, submitted to the right channels, and got six issues published. I later realized that we had done incredibly well, considering it was an unknown series by an unknown author and a relatively unknown artist. In January 2000, we used the internet to pick up where the print publication left off.

Q. How many artists do you work with?

Currently it's three: Jason and John Waltrip (Jason on Penny & Aggie and Fans, John on Guilded Age) and Chris "Doc" Marten (Widgetitis). I also do some behind-the-scenes work for writer-artist Gisele Lagace, her co-writer Dave Zero, and her assistant, whom I know only as Shouri.

Q. What is your typical workflow, for example, for a series like Penny & Aggie?

These days, I tend to take some time near the end of the year to think about what I want the coming year to bring. Usually I'll form a very basic set of "story goals," which I'll turn into both a general working outline, and a teaser for the year to come. This was the one I made for December 30ish, 2009 (also found here): 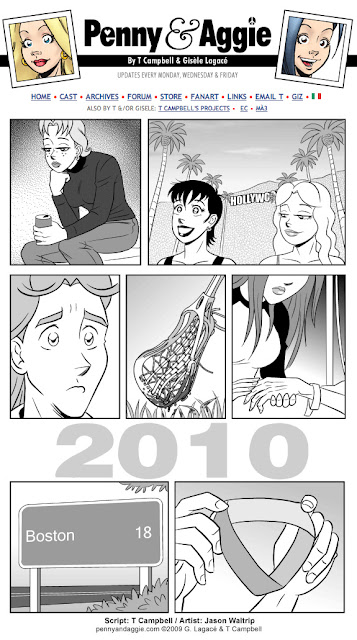 Taking just the first of those frames as an example: I knew that I wanted the series' cutest couple, Jack and Katy-Ann, to go through a rough time as Katy-Ann suspected Jack of returning to a binge-drinking habit. I knew she was going to try drinking herself, to try to understand its hold on Jack, but I asked Jason to have her worried and contemplative in a pose close to Rodin's The Thinker. (I wish all my ideas were so educated-sounding.) I was pretty sure it would end with the two of them stronger in love than before, but not 100%.

When it came time to write the story, I started as usual by writing a page-by-page outline, with a shorthand line of text describing what would happen on each page. Then, also as usual, I wrote the dialogue first, only using line breaks to separate pages, not individual speakers or even frames/panels. I knew who was speaking each line, knew how most of the panels would break down and at least had an idea what would happen visually on each page, but none of that was being written at this point. It was another kind of shorthand, really, and I've found it useful because it lets me keep an eye on how many total words I've put into the text of a page.

Once the dialogue was done, I added the breaks, then added the panel descriptions, added the speakers, and finally added the emphases-- putting a few of the words in boldface, to communicate how the dialogue should be "heard." Then I sent it to my editor Greg, who gave me line-editing and validation, and my editor Maritza, who made me rewrite two pages and question everything. Then I passed it to Jason. I'm always on hand to answer Jason's questions as he draws, but my work was still pretty much done after that.


Q. You teach a class on writing graphic novels. What are the handful of graphic novels that everyone should read, whether or not they are interested in comics?


These three:
(1) Watchmen, by Alan Moore and Dave Gibbons
(2) The Sandman series, by Neil Gaiman, and
(3) The Complete Calvin and Hobbes, by Bill Waterson.

Q. What are some of your favorite webcomics?

David Willis is my favorite comics writer who isn’t me. He inspired me in a lot of ways. Two of his strips are: Shortpacked and Dumbing of Age. Other web comics I enjoy are Out at Home, Out There, and Bobwhite.

Q. If someone wanted to create comics, what resources would you suggest?

Also, an excellent online resource is http://www.webcomics.com, which is a subscription-based service ($30/year) that provides practical cartooning advice.

Q. Is there a difference between graphic novels and comics?

There’s a difference, because people believe there is? Actually, many graphic novels began as serialized comics, like Watchmen. Only after they were collected together were they called a graphic novel. Even literature like The Scarlet Letter started in serial form. If you are trying to create a graphic novel out of whole cloth, then the marketing and expectations are different than for web comics or the comic market.

T Campbell is based in Norfolk, Virginia, and can be reached on Facebook and Twitter. Much of his work can be found at T Campbell’s Things. Individual feeds are available for Penny and Aggie, Fans, Guilded Age, and Widgetitis.